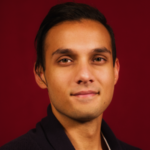 Ace Hasan was born in Pakistan and grew up in southern Virginia. Aside from the indelible tutelage of his three older sisters, Ace credits much of his upbringing to the local AMC movie theater. A combination of the two pushed him to Los Angeles where he studied film and television writing at the School of Cinematic Arts at USC. After graduating, Ace perfected the art of coffee making at various production companies and agencies before landing on set as a producer’s assistant and coordinator. Following the Workshop, Ace was staffed on Riverdale (CW).