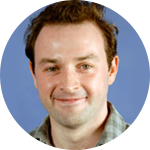 I grew up in New York City. When I was eight years old, I got involved in the film industry after being cast as the lead character in Jodie Foster’s Little Man Tate. Acting has always been very fulfilling for me, because I enjoy exploring the psychology of a character’s makeup. But as an actor, you only get to contribute one piece of the puzzle, and the story you’re telling is never your own… it’s ultimately the writer’s. Since graduating college (I studied film and psychology at Wesleyan University), I’ve come to realize how much I enjoy thinking about the big picture, and putting together “puzzles” of my own. I was drawn to television specifically because its long-form story structure facilitates the development of rich, evolving characters and complex, multi-layered plot lines.

Dexter Morgan from “Dexter.” Dexter is a particularly fascinating character to me because of his moral ambiguity. Some people see him as a homicidal monster, and others see him as a vigilante hero similar to Batman. He is a fractured and tormented character who views himself as emotionless and inhuman, and yet the way he interacts with those around him proves that he’s quite capable of feeling deep love and affection. He is driven by tragic loss, and because of this we are able to sympathize with him even though he commits terrible, horrific acts upon his victims. It also helps that he has a strict code of honor and will never hurt a person who is innocent. Whereas most villains on television are characters you love to hate, Dexter is a bad guy you genuinely want to love.