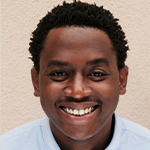 Alan Morgan hails from a small town just outside of Atlanta, Georgia. From a young age he was surrounded by storytelling, whether in church with his grandfather or nose-deep in a graphic novel. Inspired by the world around him, Alan began to channel his curiosity into creative writing. It wasn’t until his mother allowed “TV hours” that Alan realized his stories could reach beyond his notebooks. After graduating college, Alan was accepted into the DGA’s Assistant Director Training Program, working his way from trainee to A.D. and crewing on so many crime procedurals, he’s confident that he could get away with murder (though he prefers to write about them).

Tired of the harsh New York winters and 20 hour set days, Alan decided to give up the A.D. “blood money” and finally pursue his life-long dream of writing for television. After landing a job at CBS in Current Programming, he made the move to Los Angeles. When Alan isn’t writing, you can find him cooking an elaborate meal for his girlfriend and his dog, Beyonce, jotting something down in one of his many notebooks, or getting his autodidact on and learning a new skill.