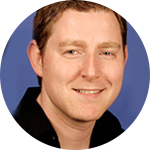 I was born in Moscow, Russia and grew up in northern New Jersey. When I was a kid I remember someone telling me – find out what you’re willing to do for free, then find out how that can be a job. Well, I loved to play pretend and concoct stories. And I loved watching television. So I just married the two ideas.

Omar Little from THE WIRE. He’s the toughest, most revered gangster on the streets – but he’s a man with a strict code of honor. He’s not a good guy, but he’s not exactly a bad guy either. He’s an outcast living in this incredible emotional grey zone, which totally fascinates me. How does he make that deal with himself? He commits terrible acts against terrible people, but refuses to hurt anyone that’s not in the ‘game.’ It’s not an angel or the Devil that’s coming to get you – it’s “Omar coming!”