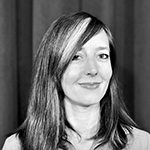 Alexa Polivka grew up in a town so Anglo-Canadian, people there thought bagels were a foreign food. As the daughter of refugees who defected from communist Czechoslovakia, she was considered odd for eating things like paprikash. But when she showed up to school dressed as an elf even though it wasn’t Halloween, her peers realized it wasn’t the food; she was weird. She got bullied, and took up writing to create powerless characters who find the strength to fight back.

She became an advertising executive, creating award-winning campaigns for clients like Pepsi and Doritos, then left to get her MFA in Dramatic Writing from NYU’s Tisch School of the Arts. There, she won a Sloan award for screenwriting, as well as awards for her plays and TV scripts. She’s written for various websites, including Funny or Die, and was an assistant to an Emmy-nominated writer on a show for Apple TV+.