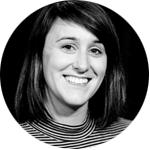 Alisha Ketry is from southern Louisiana, but doesn’t have the accent to prove it. Growing up, she was heavily involved with theater in her community, which led her to study acting at the New Orleans Center for Creative Arts during high school. She attended Columbia College Chicago where she discovered her love of writing and comedy. After graduation, she moved to Los Angeles and has worked in many different positions in both scripted and reality television. Alisha has written various digital commercials, sketch comedy for Comedy Central Digital and continues to perform around Los Angeles. Following the Workshop, she was staffed on Fuller House (Netflix).