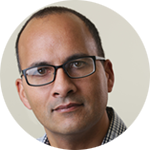 Amyn grew up in the San Francisco Bay Area and got his bachelor’s degree at UCLA and his MFA in Directing at NYU’s Tisch School of the Arts Graduate Film Program, where he made his mark with Little Man, which garnered awards worldwide including Best Short Film at the Slamdance Film Festival. He followed this up with Take The A Train, starring Kerry Washington (Scandal). His first feature film, Kissing Cousins, a provocative romantic comedy (featuring David Alan Grier and Jaleel White) won the Audience Choice Award at the Asian American Int’l Film Festival. His short film The Other Side was acquired for PBS/ITVS’s Futurestates series.

Amyn directed an episode of ABC’s Private Practice, starring Kate Walsh. Most recently, he completed the selective Warner Brothers Television Directors Workshop. He is currently prepping his next feature film, Chokora, a story set in the slums of Nairobi and pitching his latest TV drama series, Fishkill.