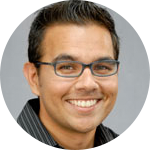 I mostly grew up in California with a detour to Austin, Texas during my high school years. When I was about three years old, my grandmother taught me Romanian since that’s all she spoke. Her method was simple. She’d show me picture books of fables or fairy tales and tell me the story in her native tongue. My Grandma later told me that as I learned the language,  I began gently correcting her anytime she forgot key plot points or left out important moments that revealed character. I guess my young brain had become wired for storytelling. And it has stayed that way since.

As I got older, the picture books were replaced by something even more amazing– television. Everything from “I Love Lucy” to “The X-Files” became events in my household. When I realized that groups of people worked together to write these amazing shows, the three year old storyteller in me found a way to have an adult career. And thus began my passion to become a television writer.

Superman/Clark Kent. Whether live action or animated, the character has had a long history in television and represents what I love best about writing– the ability to take a familiar archetype and pull something unique from it to reach audiences in new ways. I remember staying up all night as a kid to watch marathon runs of George Reeves’ “Adventures of Superman.” He fought for truth, justice, and the American way with the undaunted confidence of his post-World War II era. In turn, I felt like I could take on the world… that is, until the junior high awkward-around-girls-phase hit. But then I was drawn to the Clark Kent of “Lois and Clark.” Even though Lois Lane was falling for the hero in blue tights and a cape, Clark wanted her to choose the guy in the glasses first. That helped me feel okay with being myself. And don’t get me started on how “Smallville” relates to my own journey of self discovery. Every generation has had a Superman broadcast into their homes. Same character. Different approaches. Great stories.