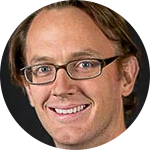 I grew up in suburban, Irish-Catholic, storytelling Philadelphia, five miles from my mother’s childhood home. She was one of fourteen children — nine boys, five girls, one and a half baths. The day our family sold the house, after my grandmother passed away in 1985, I huddled with a bunch of my first cousins (but not all forty-five of them) deep inside the dark basement, under a rusted water pipe, and listened to my uncles Rick and Steve tell the story of Henry Bloodsworth, the home’s previous owner, who hung himself from that very pipe after stabbing his wife to death. I never heard the story again, but I’ll never forget that basement, that pipe, that bloodstain (or was it?), that name. I was ten years old. I loved — and still love — being that kid in the basement, but I knew in that moment that someday, somehow, I wanted be the uncles, too.

Walter White. And I didn’t even like the guy.

Most TV dramas don’t end as well as they begin. They peter out, or grow repetitive, or lose their way, or simply stop. Not so with Breaking Bad. Five seasons after a thrilling pilot episode, the show was still hurtling forward, with a nation in its grip, barreling toward the series finale like the last hundred pages of an expertly crafted crime novel. And this was all thanks to an unlikely drug dealer named Walter White. He was the perfect marriage of character and plot, so perfectly conceived at the pilot stage — a man, a dilemma, a skill set, a solution — that the entire series seemed destined from the outset. The show’s many twists and turns were always surprising in real time, but in hindsight they felt inevitable. They were written into Walter’s DNA. His character introduction in the pilot script was like that ball of amber in Jurassic Park that contained the blueprint to create a dinosaur. Everything that followed was a massive step forward for episodic television, and inspiration for rest of us to strive to create shows that unravel like page-turners on our TV screens.