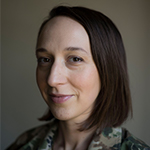 Anna Kerrigan’s films and web series have premiered at the Sundance Film Festival, won awards at Outfest and the Tribeca Film Festival, and been nominated for a Gotham Award. She has written and directed short films for Funny or Die, Amazon and Refinery 29, and is a Film Independent and Sundance Fellow. Indiewire recently featured Kerrigan as one of twenty exciting female filmmakers to watch, pointing to her new feature Cowboys starring Steve Zahn, Jillian Bell and Ann Dowd.