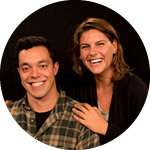 Where are you from and what inspired you to become a television writer?
I am from Connecticut and it was in college at UCLA that I discovered a desire to write. When I was little, I was a bit of a pathological liar. Luckily, I was able to turn this rather bad habit into a love of storytelling. After a couple years of short story writing, I transitioned into screenwriting, loving the idea that movies and television, and the themes and messages within them, have the ability to reach such large audiences. In film school at USC my love for television really took off. I thought of all the stories I wanted to tell, all the characters I wanted to create and they fit very clearly into what TV was becoming.

What spec did you write to get into the Workshop?
My writing partner, James DeWille, and I wrote a spec of Sons of Anarchy.

Who is your all time favorite television character and why?
A very small and very true piece of me wants to say Lizzie McGuire because she was there every day of my angsty and temperamental preteen years. However, I think there is no real writer-ly reasoning behind that, so… Shameless has been my favorite show since its beginning. Within this dark, twisted, yet somehow endlessly comedic series is Lipp Gallagher. He’s not Tony Soprano, he’s not Walter White, but I kind of like that. I like that he isn’t the leading man; he’s in the middle of the shit that it is his dysfunctional family. Not only do I swoon over his gritty good looks and bad boy behavior, but he becomes a true lens into the world of the show for me. Lipp is imperfect— he does drugs and steals cars— but he is also a genius… literally, a genius. He’s admirable and is constantly walking the line of being better than the neighborhood he came from and staying true to himself. He’s tough, loyal, witty and impeccably intelligent, all wrapped into one… just like Lizzie McGuire.