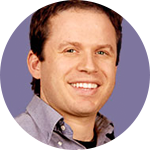 I’m from Rochester, New York and was in law school in Buffalo when a friend got me into the show LOST. He had the first two seasons on DVD and I blazed through them in about a week. Seeing Locke in that wheelchair at the end of the episode “Walkabout” was like a religious conversion for me. After that, all I wanted was to be a television writer.

Dr. Gregory House. He’s brilliant, self-destructive, miserable, but loves life, wants to alienate himself from others, yet needs to heal people. When House isn’t saving lives, he’s pulling pranks and playing mind games and beneath it all is this lost soul who’s trying to find his place in the world.