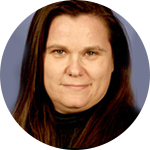 I was born and raised in Wilkes-Barre, PA, which gets occasional mentions on The Office since it’s the next town over from Scranton. The TV show, Homicide: Life on the Street, is what inspired me to become a television writer. I always loved television, probably because I was limited in how much I was allowed to watch as a kid. But Homicide just took it to a whole other level. I wanted to write something that reached people and moved them the way that show did for me. As both a writer and a viewer, what I love best about television is that we get to take these long journeys with the characters and watch them develop and change over the years.

Picking just one favorite TV character is tough, different characters have meant different things to me over the years. But if forced to choose, it would have to be Mr. Spock from the original Star Trek, which used to rerun constantly when I was growing up. I was this weird, geeky kid who never felt like I fit in. Seeing Spock, who literally was an alien, find his place and purpose on the Enterprise and be not only accepted by those around him, but to have those people become his friends, made me feel like I, too, would eventually find my own place in the world. Which is incredibly cheesy and sappy, but true. Being able to create something that has that kind of impact on people is why I love working in television. Well, that and the fact that working in television meant that I got to meet Leonard Nimoy last year. On my birthday. Having Mr. Spock wish me a happy birthday also made me love working in television.