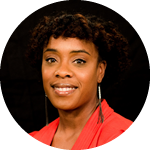 Where are you from and what inspired you to become a television writer?
I was raised in the San Francisco Bay Area in a gigantic extended family with deep Southern roots, strong opinions and a lively tradition of storytelling. So it came as no surprise to my parents that their rambunctious middle child would grow up to be an artist. It started by watching family members take turns “spinning a yarn or two” at the weekly Sunday dinners. I was enraptured by how all eyes remained on the person telling their tale. I totally wanted to do that. I became fascinated by storytelling in all its different forms: fiction, acting, music, television, theater and film.
I started my professional journey into storytelling as a classically trained actor. I recently began writing at the encouragement of playwrights and actors I worked with, and from a desire to write more dynamic parts for women. This led me to graduate school to be a playwright. There I found myself attracted to creating epic narratives with large ensemble casts. I was inspired to move into television because of the sheer depth and breadth of awesome TV that’s being make right now and the ability to tell complex stories that can develop over multiple seasons to give characters and full emotional arc. Plus with television, people all across the world can literally invite me into their homes to “spin a yarn” of my own. How cool is that?

What spec did you write to get into the Workshop?
The Newsroom

Who is your all time favorite television character and why?
I think I inherited my parents’ eclectic taste in TV because I watch a weird array of shows. Like my father, I love all things sci-fi, B movies, Kung-Fu, action, comics, Monty Python and just about any kind of procedural. My mom instilled a love of classic TV and movies, rom-coms, suspense, British TV and high drama. But, no matter the genre, to me good television provides a backdrop for our various cultural, political and social conversations, while also making us laugh, cry or scare our pants off.
Lately, I’ve gravitated towards dark, intellectual, dramatic shows with deeply flawed central characters trying to make the best of the twisted world around them. Since there are so many delicious characters that fit this bill it’s hard to name just one. But my favorites are all complicated but genuine, no-nonsense but caring, and 100% badass. My top seven in no particular order: 1) Sydney Bristow- Alias. 2) Rick Grimes- The Walking Dead. 3/4) Sayid Jarrah and Kate Austin- Lost. 5/6) Catelyn and Arya Stark- Game of Thrones. 7) Sarah Manning- Orphan Black.</stron