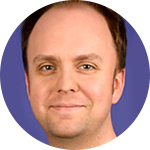 I grew up in New Orleans, LA. where I studied television production in the hopes of becoming a director. The best realization I ever could have made was that directing was not for me. To an extent, writing gives you access to a project on the “ground floor”.

Denny Crane / Alan Shore (Boston Legal) — they live and breathe, and their “man-love” is very tangible and real. Teen-vette is a close second. Because he turned into a corvette when he got upset. Or sweaty. The important part is that he gets great mileage.