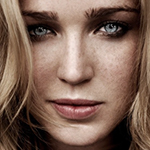 Caity Lotz currently stars on the CW series DC’s Legends of Tomorrow, after recurring on Arrow and appearing on The Flash and Supergirl. Caity has appeared in the films Small Town Crime, The Machine, The Pact, and Battle of The Year, along with a memorable arc on AMC’s Mad Men. She also directed the short film Twin Turbo. Following the Workshop, she directed an episode of DC’s Legends of Tomorrow (CW).