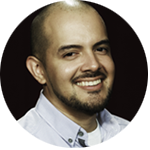 Cesar Mazariegos grew up in Washington D.C., back when it was the murder capital of the world. He didn’t play outside that much, obviously, so he watched a lot of television. His love of storytelling drove him to NYU Film School. After school, Cesar hustled as a legal temp, stress management counselor, visual artist, and dog walker. Cesar finally took the plunge and moved from New York to Los Angeles where just one year later, he landed a job as a funeral assistant at a Catholic mortuary. Straightening the ties of the dearly departed, Cesar was not blind to the unsubtle metaphor and vowed to buckle down and work even harder to get his writing career off the ground.Since then, Cesar has been selected as a writer for the CBS Diversity Showcase, and most recently had his digital series, High & Mighty, produced by Warner Bros.’ new digital initiative Stage 13. Following the Workshop, Cesar was staffed on Deception (ABC).