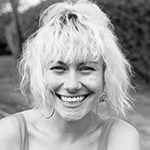 Writer/director Chell Stephen was raised in Toronto on a healthy dose of music videos, The X-Files and teen dance movies – influences which shaped her debut short film Crystal (SXSW 2014). Its follow up, Shauna is a Liar, was based on a true story from Chell’s youth and featured camp visuals, a dash of the surreal, and an earnest beating heart at the center – Chell’s wheelhouse. Chell was a Sundance Fellow in the 2017 New Voices Episodic Short Form Lab with her series Kidnapping Brihanna.  She also directs fashion and music content for brands including L’Oreal, JanSport, Fendi and Givenchy. After completing the 2019 Warner Bros. Directors’ Workshop she directed an episode of Riverdale (CW).