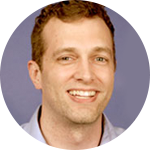 I’m from Greensburg, Pennsylvania, a suburb of Pittsburgh. Whether it was “Seinfeld” or “The Wire” or “Voltron: Defender of the Universe,” great television has always entertained, challenged, enthralled and inspired me. I want to do the same for the next generation of unfocused slackers.

Ted Lawson from “Small Wonder” because he reminds me of a simpler time, a time when a man could build a female teenage robot without being questioned, divorced or arrested.