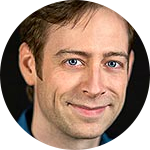 I was born on the East Coast (Maryland), but spent my childhood moving all over the country. Always being the new kid in school was a constant challenge, but luckily I had a superpower that attracted friends — I could draw. I grew up on superhero comics, and was constantly creating my own characters and stories. During my teens, my sights were set on a career writing and illustrating for the medium I loved so much. But in college (UC Santa Barbara), a friend/fellow comic shop employee introduced me to a little WB television show called BUFFY THE VAMPIRE SLAYER. And it rocked my world. It told the kind of long-form, character-rich ensemble stories I loved in comics, only better. It used imaginative action, monsters and superpowers as highly-visual metaphors for the characters’ deepest emotional struggles. I was hooked. I wrote a Buffy spec and by some miracle got it into Joss Whedon’s hands. I’m sure he never read it. Because, well, he flat-out told me he wasn’t allowed to. Something about conflict of interest and incurring the wrath of demonic lawyers. But it was a memorable start to this exciting journey. And now look where I am — honored and humbled to find myself full circle, back to the WB. Hey, maybe one day I’ll get Joss to read my work without fearing a legal apocalypse…

Wow… there’s so many! I’m tempted to say Xander Harris, or Wesley Wyndam-Pryce, or Michael Scott, Nate Fisher, Dexter Morgan, Hannah McKay, or SMALLVILLE’s Clark Kent. Or the type of character I always find myself relating to most — conflicted-yet-dependable leaders like LOST’s Jack Shephard or PARENTHOOD’s Adam Braverman. Probably because I’m the eldest of three brothers, have stepped into leadership roles throughout my life, and understand how it feels to make difficult decisions for the good of the group. But if I had to choose just one, in my opinion the greatest character ever written for television is the compelling and profoundly complex Andy Sipowicz of NYPD BLUE. How those writers created such a cranky, violent, bigoted, alcoholic ogre of a detective and at the same time pulled off making him the moral bedrock of their show, one of the strongest, most loyal and sensitive men in TV history… it’s nothing short of magic. His epic journey of self-improvement was not only deeply moving, but also inspired in me a lasting hope that our worst flaws are demons that can indeed be vanquished. Especially if you’re sporting a badass moustache. Seriously though, I believe our time on this Earth is an exciting, ongoing opportunity to make ourselves better people, the world a better place — and I have my parents, the superheroes I grew up with, and Andy Sipowicz to thank for that.