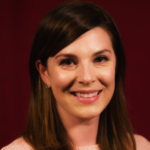 Born and raised in Minnesota, where the wintertime lows rival the surface temperature on Mars, Christianne Hedtke kept warm by devouring books and movies, writing endless ghost stories, and helping her dad build kayaks and telescopes. She eventually earned a BA from the University of Denver and launched her career in the world of film festivals, with stints at the Sundance and Tribeca Film Festivals, and over a decade on staff at the Telluride Film Festival. Between fests, she worked on feature films in Minnesota and Chicago, finally landing in New York, where Hedtke spent four years developing original content for Nickelodeon. When she wasn’t getting slimed, she was moonlighting as an astrologer. In 2015, Hedtke was selected for the Sundance Institute’s Episodic Story Lab. She’s been a contributor to Filmmaker Magazine, MovieMaker Magazine, and wrote on Nick Jr.’s animated series Sunny Day. Following the Workshop, Christianne was staffed on Chilling Adventures of Sabrina (Netflix).