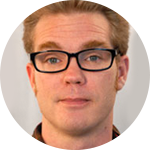 I grew up on the South Shore of Massachusetts. My family was lucky enough to live on top of a hill. So, though our town was the last in the county to approve cable television, my household had several TV stations to choose from. What this meant was that we were able to receive both stations from Boston AND Providence. And that meant twice as many syndicated episodes of “M*A*S*H.” Every day I was able to see at least two solid hours of Hawkeye and the gang and if I was home sick from school, double that. As a child it informed both my sense of humor and sense of morality. I learned about the senseless nature of killing, the insanity of war and how, in the right light, they can be used for humor. It showed humor as a defensive mechanism against madness. In that sense, “M*A*S*H” “made jokes not only seem powerful but noble. Who wouldn’t want to do something noble for a living?

No contest. Hawkeye Pierce from “M*A*S*H.” He used his sense of humor as a defensive weapon, against cruelty, against hatred and against the ever-encroaching insanity that looms heavy for anyone living in a war zone. There’s an incredible power in a character that uses laughter to survive.