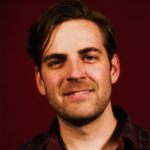 Originally from Florida, Conway Preston studied English at Vanderbilt University, writing his thesis on hardboiled detective fiction. Following college, he worked for a Latin American community development non-profit before attending law school.  Ultimately, Conway took a job at a law firm in a small town outside of Nashville, litigating cases on behalf of clients including the local Sheriff’s Department and Board of Education.  Throughout his time as a lawyer, Conway maintained a second career in Nashville’s theatre community, writing and producing (and occasionally acting in) full-length dramatic plays, offbeat comedies, and even a pair of short films.  Other works include a pilot that was a finalist at the Nashville Film Festival and a feature script that was a finalist at the Nantucket Film Festival. Following the Workshop, Conway was staffed on Swamp Thing (DC Universe).