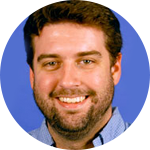 I was born in Pittsburgh, PA. and raised in Orlando, FL. I have been inspired by, The Keaton Household, Cheers Bar, The Huxtable Family Brownstone, Central Perk, The Nantucket Airport, Monk’s Cafe, The Manhattan Criminal Court Building, The Tool Time Set, Dunder-Mifflin, 30 Rockefeller Plaza, Paddy’s Pub, The Bluth Company Model Home, and all the other places I spent so much time laughing till I cried.

Sam Mayday Malone — Probably one of the most complex characters to ever exist in a sit-com. There was never a character I wanted to be like in so many ways and not want to be like in so many ways. The good parts of Sam Malone were something to aspire to… and I tried. Unfortunately, though, I never seduced an endless parade of women, pitched for the Boston Red Sox, or became known for my remarkable head of hair. The closest I got to Sam Malone status was nearly becoming an alcoholic in college.