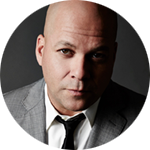 Award winning filmmaker David Rodriguez was born and raised in The Bronx and Long Island. Coming from a very small fraternity of “cops turned filmmakers,” David broke in to the independent film scene in 2003 by producing, writing and directing his first feature film Push (a ContentFilm release), and soon after, Variety stated that, “Rodriguez is a filmmaker to watch.” David followed this up by producing, writing and directing two more feature films, the acclaimed American Bully(available on DVD and HULU) starring Matt O’Leary, Marshall Allman, John Savage and Natasha Henstridge and, Once Upon a Time in Queens (a 2014 Lionsgate release), starring Paul Sorvino, Michael Rapaport, Renee Props and Chazz Palminteri. In 2014, David made the feature to television transition and directed episodes of NCIS: Los Angeles, Stalker, Scandal (2015) and Game of Silence(2015). David is currently attached to direct the Gulfstream / Voltage big-budget action/thriller Down Range written by Mike McGrale. David is a member of the DGA, is co-chair of the DGA’s Latino Steering Committee and serves on the Western Director’s Council. He now lives in Los Angeles.