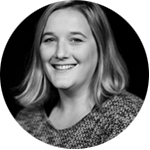 Deanna grew up in The Winter Strawberry Capital of the World (Plant City, FL). As a child, she spent her free time writing stories on her dad’s computer and avoiding normal human interaction with other children. Always a writer at heart, Deanna attended the University of Florida, where she majored in Public Relations and was taught how to write press releases and bios like these. However, it was her creative writing and television elective courses that really excited her and eventually pointed her in the direction of Hollywood. After a brief stint on the pilot of Keeping Up With the Kardashians, Deanna got a job on CSI, where she held positions in both post production and the writers’ department. She ended the show’s run as writers’ assistant, with two freelance scripts under her belt. In addition to getting into the Warner Bros. Writers’ Workshop, she was an NYTVF Lifetime Writing Fellow, and her pilot Long Lost won first place in the 2015 Nashville Film Festival Drama Teleplay Competition. Following the Workshop, she was staffed on Blindspot (NBC).