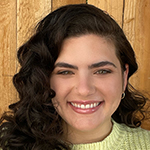 Los Angeles native Devon Balsamo-Gillis is the second of four daughters born to an Oscar-losing monster-making dad and a therapist mom, so she was doomed from the start.

With her father’s not-questionable-at-all guidance, Devon developed a deep and twisted love for all things dark, deviant, and rebellious. But Devon is a Virgo and always craved structure, so at 7 years old, her parents enrolled her in Martial Arts and she went on to become the first girl to earn her Black Belt at her Karate dojo.

After graduating from her all-girls Catholic high school, Devon attended four universities in three years, only to find the world of academia did not suit her. She graduated early from UCLA and began searching for a career path that would fulfill her creative and practical sides. After a spectacular failure as a wedding planner, Devon decided to go back to a childhood passion – writing – and has since worked as support staff on several shows.

Devon also co-hosts On Their Behalf: A True Crime Podcast, focusing on cases that were left out of the media spotlight due to the victim’s race, sexuality, or religion. A fan of street parking and strip malls, Devon currently lives in The Valley and is pursuing her lifelong dream of becoming a pig owner.