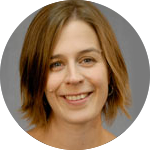 I grew up in Washington, DC in a family with strong opinions and learned at an early age about the importance of language and storytelling. With the right words, people would listen. With exactly the right words, they might even change their minds. I wrote my first play at 16 and, after standing in the back of the audience watching people pay attention to my story, I was hooked. That was gonna be my drug. As a playwright, I was inspired to move into television because of the sheer depth and breadth of awesome TV that’s being made right now. I’m excited by the different freedoms and limitations of a new medium (even if I can’t stand behind everyone’s couches and watch them react to the show).

Imagine that it’s 1992 and you’re the well-organized, extremely nerdy, sweater-wearing daughter of a somewhat more freewheeling, impulsive single mom. You two share a fair amount of tension, but there’s one thing you both look forward to every week and it’s Absolutely Fabulous. For the half-hour duration of a British sitcom, you’re laughing together instead of bickering.  She can see that some of her schemes are a little loopy. You can see that you’re a little uptight sometimes and no one should take their math homework that seriously and it wouldn’t kill you to relax for a second, would it? Darling?

There are many television characters I love, but no one will ever live as close to my heart as Edina Monsoon. She’s over-the-top, needy, loud, abrasive, generous, selfish, petulant, spiritual, ambitious and perverse, but she’s also a tough, single, working mom who kept her daughter, Saffy, and her mother and her best friend afloat for years.   The more I think about Eddy, the more I realize that somewhere along the way I stopped being a depressive killjoy like Saffron, and I started taking some real risks and having fun. Thanks Edina – sweetie, darling, sweetie-darling.