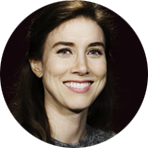 Eileen Jones is originally from Houston, Texas. Her first writerly gig was interning at Texas Monthly magazine, where she had the arduous task of tasting and describing tortillas for their resident food critic. Since then, her career has taken a different—but no less satisfying—path. With the goal of becoming a speechwriter, she assisted Vice President Joe Biden in the final leg of his Senate career, but found herself more captivated by The West Wing reruns than C-SPAN. Eileen switched gears, earning her master’s degree in creative writing with a screenwriting focus from Oxford University. Upon moving to Los Angeles in 2010, Eileen assisted director Kathryn Bigelow in prepping Zero Dark Thirty. As she pursued her television writing career, Eileen made a name for herself as the go-to ghostwriter for many A-list directors, crafting some 250 treatments for branded short content, as well as documentary, feature, and television projects. Since 2015, Eileen has taught television writing for Script Anatomy. Following the Workshop, she was staffed on Lethal Weapon (FOX).