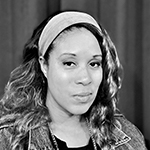 As an Army brat who spent her elementary years living in Italy, home has always been a moving target for Erica Mountain. After an undergrad business degree at VCU, she was invited to L.A. to dance with Debbie Allen and then to dance in Step Up alongside Channing Tatum. While working towards an MFA Screenwriting degree at USC, Erica worked for Hunger Games writer Billy Ray, at Bad Robot and at the Fox Writer’s Studio. Since graduating, she has written & directed several short films and curated two film festivals. She has also worked as writers’ support staff on Criminal Minds and Homeland and for Warner Bros., where she created extra content for the DC Comics shows. She is currently a Story Analyst at Universal and taking her latest film Polaroid to festivals. Beyond her strides in writing, Erica is a travel junkie, dancer and foodie who is now making a home alongside her husband and adventure-seeking service dog.