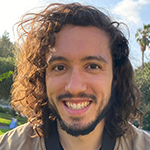 Evan Iwata grew up in Oshkosh, Wisconsin, where his Japanese American father and extremely Midwestern mother provided him with a nurturing yet culturally confusing East-meets-Midwest upbringing. Inspired by his father’s photography career, Evan took an early interest in filmmaking, and at the age of 16 he was hired to create a documentary about Oshkosh’s little-known hip-hop scene. Emboldened by this bizarre yet inspiring experience, he moved to Los Angeles the following year to attend the USC School of Cinematic Arts. While finishing college, Evan attempted to break into the entertainment industry through a series of odd jobs and internships, and eventually found his way to a job in a writers’ room. He has since worked in various support staff roles on CSI: Cyber, Pure Genius, The Fix and Emergence, and was the Writers’ Assistant on Starz’s Outlander. Following the Workshop, Evan was staffed on Subject To Change (HBO Max).