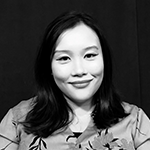 Evelyn Yves grew up in Jakarta, Indonesia, surrounded by crazy rich Asians while her family was going broke. She sought comfort in reruns of American shows and convinced her parents that she wanted to be a doctor like Doogie Howser or a lawyer like Ally McBeal.

To her Tiger Mom’s disappointment, Evelyn’s real dream was to write Toby and CJ’s epic walk-and-talks in The West Wing, so at 17, she flew halfway around the world to LA and launched her career. Evelyn interned at the Dino de Laurentiis Co., Franklin Leonard’s The Black List, and Scott Meyers’ Go Into The Story. Her pilot The Merc was a finalist at Script Pipeline and the Austin Film Festival. Evelyn was also selected as one of five writers to participate in Aaron Sorkin’s Masterclass — a childhood dream come true. Following the Workshop, Evelyn was staffed on Katy Keene (CW).