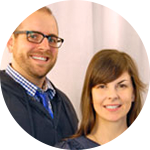 I was born in Miami, FL, to a pair of first generation Cuban-Americans. I’ve always been obsessed with cinematic storytelling; my Dad likes to tell the story of us sneaking into a full screening of E.T. when I was three. We had to sit on the steps in the aisle and he claims it was the longest he had ever seen me sit still and shut up. But the story my Dad won’t always tell is how he inadvertently introduced me to the power of television. My father was very warm and loving at home and would always goof around with me, but he was also the guy who woke up early, put on a suit, and went to work at a big office building downtown. I never knew he could have a sense of humor on his own terms. Until one night, I caught him falling off the couch in a fit of laughter while watching an old episode of Taxi. After a long, stressful day of work, my father, the dictionary definition of “straight-laced” could be reduced to a giggle fit by a couple of well-placed lines by Christopher Lloyd. That’s why I want to be a Television Writer: to make serious men fall off of couches.

I wrote a 30 Rock with my writing partner Amy Higgins.

Being a boorish buffoon myself, I am frequently drawn to my own kind. That’s why the characters that always hit me right in the gut are David Brent from The Office and Hank Kingsley from The Larry Sanders Show. On the surface, both are desperate, grandstanding blowhards; wannabe showmen living smaller-than-life lives. They constantly clamor to be the center of attention despite the fact that they have nothing of substance to offer. Just ego and their unbelievable, unjustified cockiness. They are men who desperately want to be the comedic leads, and their awkward attempts become inadvertently hilarious. On a deeper level, both these are characters that just want to be loved and have a secret fear that they’re not worthy of it. Also, I do the best “David Brent Dance” this side of the Atlantic. HEY NOW.