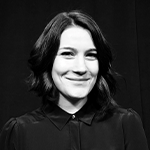 Hannah Rosner grew up in Michigan and attended film school at Columbia College, where she made short films by day and played bass in a punk rock band by night. The best part wasn’t traveling the country in a beat-up Ford Aerostar, relentless partying, and living off PBR and PB&J – it was being a part of a team of artists working together to create something special.

Hannah’s passion for genre stories led to her first job in Hollywood working with esteemed screenwriter Zak Penn, during which time she also directed an indie feature, Park City. One of Hannah’s childhood dreams came true when she worked as the Script Coordinator on Steven Spielberg’s Ready Player One. She was the writers’ assistant on Jupiter’s Legacy (Netflix), and upon completion of the Workshop, Hannah was staffed on Legacies (CW).