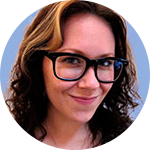 I grew up in New York, NY. I had a bordering-on-unhealthy obsession with “China Beach” as a kid, which turned me into a lifelong U.S. history-and-culture buff. Armed with an American Studies degree and an incredibly low-paying editorial job in New York several years later, I came to really appreciate what (free) TV means to people, and why serialized storytelling is so important to so many people’s lives … and basically, I just felt like I’d stumbled onto my calling. Plus, you know, getting paid to make stuff up is pretty much the best job ever.

Every single character on “Freaks and Geeks.” Because they’re awesome.