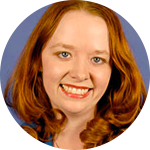 I grew up in Kingsville, Texas. My love of great storytelling was my inspiration for wanting to be a TV writer. Movies were adventures I went on; but TV was nightly comfort where I got to know and love my favorite characters and share that journey with them night after night, week after week. Realizing that I could be the one to tell stories (that I could be a TV writer) was, to quote my favorite guru Oprah, “my light bulb moment.”

Choosing my favorite TV character is like picking my favorite child (if I was crazy enough to have one of those). Being a girl who lacked physical coordination and had never even traveled out of the continental United States, Alias’ Sydney Bristow was a kick ass woman who pursued her grad degree, stood by her friends and battled Chechnyan rebels without breaking a sweat. She made being an international spy seem like something I could do, if you know, I was recruited by a covert organization and given lots of high tech toys. Sydney was as close as we’ve gotten to a female James Bond and infinitely cooler than Wonder Woman or Supergirl.