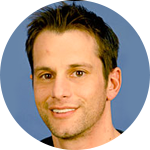 I grew up on the streets of an upper-class Miami suburb. Failing at acting inspired me to write television.

Scooter the Muppet. Let’s first get past the probable objection of a Muppet as a viable candidate. To do so, it’s best to define ‘character’ as it pertains to television shows. However, defining ‘character’ with the scrutiny it deserves will inevitably lead to a 50 page philosophical argument examining the idea of self; where-in I would play all sides of the discussion channeling Plato, Descartes and the great Chevy Chase. Clearly, this is beyond the scope intended here so I’ll just say this: it’s widely accepted that the island on Lost is a character. If land can be a character, so can a Muppet.

Scooter was the most normal Muppet. It’s often believed that Kermit was the show’s straight man–this is not true. For many seasons every episode began with Scooter, The Muppet Show’s stagehand, walking into the host’s dressing room and telling them, “15 seconds to curtain.” That opening moment gave The Muppet Show its starting point of order. We viewers could not have measured the amount of chaos each episode would fall into had we not been first given that moment of calibration. For a second, the production and Scooter were in sync. As the episode progressed, the gap between intention and actuality grew as the show skewed into greater disorder. But Scooter remained level throughout, the constant by which to compare.

Thanks to Scooter’s unwavering ordinariness, being wild was always more fun.