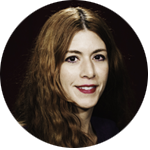 New York-bred Iturri Sosa’s path to writing was far from linear. In fact, if it weren’t for a visit to the Scared Straight program (not the best title for juvenile reform), life might have gone a different way. The program worked so well, a few years later, she found herself at The University of Chicago, where she graduated with a degree in cultural psychology. While in graduate school, she trained at Cook County/Stroger Hospital. Afterwards, she moved to southern Mexico, where she conducted anthropological research that sought to improve access to mental health care for rural Yucatec Maya. But a love of off-Broadway theater led her to Labyrinth Theater’s summer intensive, where, surrounded by talented playwrights and actors, she was inspired to make the leap into creative writing. An alumna of the HBO writing program, Iturri shadowed George Pelecanos and David Simon during production of The Deuce, a drama that will air on HBO. Following the Workshop, she was staffed on Gotham (FOX).