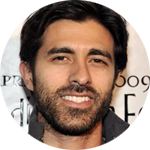 Jaffar Mahmood  [Jah-fur Ma-mood] was born and raised in Toms River, New Jersey. He received his B.A. in Economics from Tufts University and his M.F.A. from The Peter Stark Producing Program USC. The issues Jaffar faced growing up bi-racial became the inspiration for his feature directorial debut, Shades of Ray. Executive produced by Jake Kasdan (New Girl), the independent film stars Zachary Levi (Chuck) and won awards at film festivals around the world.

In 2013, Jaffar was a member of the inaugural Warner Bros. Directors’ Workshop. From there he directed/created Courtside, a short comedic web series that got the attention of executives at HBO. They invited Jaffar to shadow on the HBO comedy The Brink. In late 2014, Jaffar booked his first network television directing gig—NBC’s About a Boy.