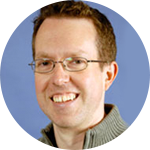 I’m from a little town in Northeastern Pennsylvania called Harvey’s Lake, and I’ve been pretty much obsessed with television ever since I was a little kid. I can very clearly remember convincing my mom to record Spider-Man & His Amazing Friends one Saturday morning while I was at soccer practice. And when I say “record,” I mean she used an old cassette recorder (audio only!), since we didn’t yet have a VCR. And to her credit, she did it. She also ran the vacuum during the show, but it’s the thought that counts, right?

What I like about TV is that you get to know a set of characters over a long period of time. No matter how good a movie is, it ends. But a successful TV show can go on for years, and I love being part of that long journey.

It’s a very tough call, but I’d have to say Thomas Magnum. I pretty much lived off of a diet of daily Magnum, PI reruns as a teenager, and I just feel like Magnum was a really well-rounded, three-dimensional character. Tough but fallible. Loyal, but not above manipulating his friends. Frustratingly immature and stubborn. I think it all comes down to a combination of Tom Selleck’s natural likeability and the way we got to hear his thoughts thanks to the magic of the voice-over.