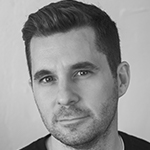 Jeff Cassidy is a Canadian-born writer and director.  He began editing music videos at the age of 19 and soon after joined the camera department.  As of 2015, he had worked behind the camera on over 70 major network television series and feature films, as well as countless commercials and advertising spots.

Jeff’s short films have played in numerous film festivals. His latest short, Sidekick, has received over 400,000 online views, garnering attention from media outlets like Collider and Entertainment Weekly.  He is currently in development on several feature films and television projects, including a movie with Oscar-nominated producer Robbie Brenner.  Jeff was selected for the 2018 WB Directors’ Workshop and has signed a blind script deal with Warner Bros. TV.  Following the workshop, he directed an episode of The Flash (CW).