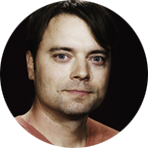 Born in the heart of Appalachia, Jeff Thomas grew up in the 90s glued to the USA Network on Monday nights, dreaming of one day performing on WWF Monday Night Raw. But being woefully undersized, he put that dream on the back burner in favor of earning a journalism degree from West Virginia State University. His career as a TV news photojournalist took off on the heels of the Sago Mine collapse and Virginia Tech shootings, but his dream of wrestling superstardom never died. He found a rag-tag group of local professional wrestlers who showed him the ropes, and for years Jeff terrorized the Midwestern independent wrestling scene as the dastardly “Outlaw” Devin Davis. Injuries ended his pro wrestling dreams, so he decided to go back to school. After earning an M.F.A. in screenwriting from USC, he found himself stepping into the role of a stay-at-home father of his son, Jack, and taught himself woodworking to replace his family’s Ikea furniture. Following the Workshop, Jeff was staffed on Titans (DC Universe).