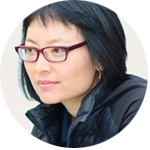 Jennifer Phang’s sophomore feature Advantageous won the U.S. Dramatic Competition Special Jury Prize at Sundance, was acquired by Netflix, and released to exuberant press and audiences.Advantageous was then nominated for a 2016 Film Independent Spirit Award.

Phang will be directing her first episode for Warner Bros. in Fall of 2016 and is mentored by Emmy-winning producer/director Michelle MacLaren (Breaking Bad, Game of Thrones, The Walking Dead) Additionally, Phang was selected for the 2016 Fox Global Directors’ Lab and is a recipient of the inaugural San Francisco Film Society Women’s Filmmaker Fellowship and Grant.

A Berkeley-born daughter of a Chinese-Malaysian father and Vietnamese mother, Phang graduated from the MFA directing program at the American Film Institute. Phang is currently developing the feature Canopy and an episodic project. Out of the Warner Bros. Directors’ Workshop she directed an episode of Major Crimes (TNT) and most recently directed an episode of The Exorcist (FOX).