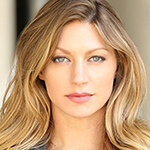 Jes Macallan, a series regular on DC’s Legends of Tomorrow, previously starred for four seasons in the ABC drama series Mistresses. She was also one of the leads in an ensemble cast for the digital film series, Relationship Status, executive produced by Milo Ventimiglia and StyleHaul, which screened at the 2017 Tribeca Film Festival. Some of her other onscreen credits include Red Band Society, NCIS: Los Angeles, Grey’s Anatomy, Shameless, and Justified.

Macallan wrote, directed and produced the short film Self, E, which is currently on the festival circuit.  She also co-wrote the film 12 Days with fellow actor and friend Jerry O’Connell, which is in final negotiations to be sold, produced, and distributed by the Hallmark Channel.  After completing the Warner Bros. Directors’ Workshop, she is slated to direct an episode of Legends Of Tomorrow (CW) in the 2020-2021 season.