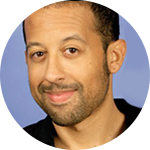 I was born in New York and moved to Michigan when I was seven. My dad used to take me to this small theater on the weekends that would feature current movies as well as others that had gone beyond their theatrical run. Then I’d go home and script out “sequels” with action figures based on what I’d just seen. Soon the scripting turned into writing short stories and always choosing the essay question options on exams.

I was hell-bent on writing features until “Lost” premiered. After seeing that a high concept serialized show could create deep, novelistic stories rich with character development, I geared my writing towards television.

Don Draper from Mad Men. I think people are drawn to him because we all wear different masks depending on the situation. Don’s built up these barriers between his different personalities that are so thick that each side looks like a completely different person. And although the audience sees all of his different faces, even we’re not sure who he really is. At the same time there’s a fierce devotion to getting what he wants that stands alongside a nobleness present in his character; when we see how loyal he can be to his co-workers and watch him go out of his way to protect them, we admire that and find it difficult to get mad at him for struggling with his impulsiveness.