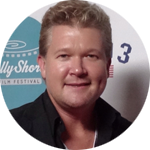 Jimmy Gadd started his career as one of the original Oscar Mayer Wiener Kids in the early 80’s. Several years later, he began work on documentary films at the age of 12. During his college years, Jimmy’s love for filmmaking was amplified while making a documentary for in Ensenada, Mexico. He attended a two year film school in Scottsdale, Arizona where he graduated with a degree in Acting, Directing, and Production. Jimmy has worked on several features as an Assistant Editor for Sony, HBO, and Paramount, during which time he graduated with honors with a degree in Screenwriting from Cal State University, Northridge where.

He has since worked on a number of hit shows including The Mentalist for which he was lead editor for seven years. After completing the prestigious WB Directing Program he directed his short film, Bound For Greatness which continues to perform well at film festivals. He recently helped produce a feature documentary called, The Tale of Two Thieves: The Great Train Robbery that was sold to Netflix for its fall premiere in 2015. He is also currently prepping two feature and directing a Lifetime movie.