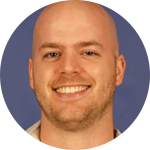 I grew up in the Chicago suburbs. I’ve always loved to write, and eventually found that television best fits my strengths. So beyond that, I suppose what inspired me was the idea of being able to work with a group of people week after week to craft entertaining stories.

Scrooge McDuck. A greedy, caustic duck who does what he wants and doesn’t listen to anyone, followed around by three young nephews who are always getting into trouble? Clearly, the inspiration for House MD. Also, the guy freaking swam in money. Literally.