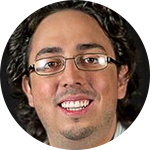 I was born in Colombia, a country you may know for its exports of coffee and sitcom writers. I moved to the U.S. when I was nine, and when I got here, television instantly became my guide to American culture. Sitcoms in particular changed the way I looked at the world, assured me that I wasn’t the only one who sometimes felt out of place, and showed me that life could and should be made fun of. Maybe this lesson didn’t help me succeed in my college engineering classes–there’s nothing funny about the Bernoulli equation–but it was the best lesson I ever received in life, and it’s led me to want to write for the very medium that has always given me so much joy.

George Costanza. Poor George. He works so hard to not work, suffers so much to be happy, but he’ll never find peace. George goes through life as a “short, stocky, slow-witted, bald man” and also as my ultimate comic character. Comedy is failure, and Costanza is a colossal failure. Comedy is conflict, and Contanza is a pile of conflict. Comedy is pettiness, and Costanza is a vortex of pettiness. But really he’s just like every one of us–too self-obsessed to get out of our own way. He’s a fantastic, warped version of ourselves–only balder, more inadequate, and more hilarious.