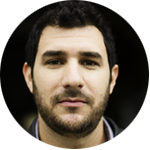 Joel Novoa was born in New York, but grew up in Caracas, Venezuela. He holds a Law Degree and a MFA in Directing from American Film Institute. Joel has been honored with awards for many of the films that he has directed. He received critical praise and distinction from more than sixty film festivals. Joel directed God’s Slave at the age of twenty-four. The movie received worldwide theatrical release and was purchased by Netflix. Joel directed the film I.D.2: Shadwell Army, sequel to the prestigious British hooligan film I.D, starred by Linus Roache. It premiered on 25 screens across U.K. and was very well received in Europe. Finally, Joel directed Day of Reckoning for NBCUniversal. It was one of the year’s top-rated films for Syfy Channel. He just completed his second film for NBCUniversal, The Nanny, which will premiere at the end of 2017 through Universal Pictures.