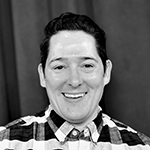 John Bring was born and raised in a small town near the Georgia-Florida border. Growing up, he used his parents’ Pawn Shop as his own personal production house, making homemade “blockbusters” with secondhand cameras and props. He channeled his obsession with comic books, theme parks, and R-rated movies into his own creations, and after college, moved to Los Angeles with big dreams and zero prospects. Through tenacity and blind luck, he found himself working on an impressive array of single-season TV shows and unaired pilots. From there, John would work as the Writers’ Assistant on the long-running CW drama, Supernatural, where he would go on to write two episodes. He was also a co-writer and artist of the comic book series, Penguins vs. Possums. If you’re looking for him, Disneyland is a good place to start.